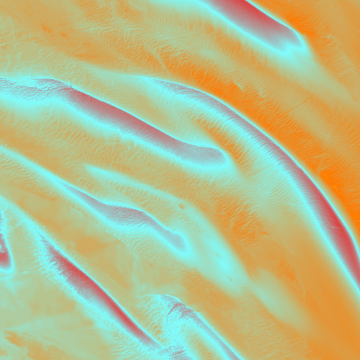 The annual update of the Marine Themes Digital Elevation Model (DEM) was completed and delivered to all our Licensed Partners and direct, primarily public sector, licensees in January. Web Services using the DEM were also updated. ‘The DEM includes digital survey data from the UK and other Hydrographic Offices augmented by over 500 paper survey or fair sheets, digitised by OceanWise, and nautical chart data where survey data is not directly available. ‘The most recent update includes the addition of 126 new surveys, including some in areas that have never been surveyed using modern techniques (see image of sandbanks in the North Sea).

The DEM comprises a 1 and 6 arc second resolution dataset, as well as a 15 arc/ second dataset that OceanWise contributes to EMODnet on behalf of the UK. The DEM is accompanied by a coverage or metadata layer providing details of the input survey data, making Marine Themes the most detailed, comprehensive and up-to-date seabed surface model currently available for NW Europe. For more information on the DEM and our other Intelligent Marine and Coastal Mapping Data, please visit maps.oceanwise or contact us directly.