Hurricane Maria caused widespread damage on the Caribbean island of Dominica on the night of 19/20 September and our thoughts are with the islanders as they start to rebuild their lives. Data from the OceanWise and GIS SRL installed monitoring station on the island’s east coast stopped being received at around 0230 AST, either via the US GOES satellite system or via island’s cellar network. Nothing was heard from the station, and the worst was feared, until suddenly after 8 days, data started to appear on Port-Log.net again. First, new data started to be displayed then all of the missing data was sent through as the backlog was cleared.

Both Valeport’s Pressure Sensor and OceanWise’s supplied Smart Telemetry modem, the ip.buffer, had worked as designed and all the data acquired as the Cat 5 hurricane passed overhead was recovered. Mike Osborne, OceanWise MD commented “The ip.buffer was installed for its resilience and ability to store and recover data when communications fail for short periods. However, to capture data throughout the storm and then to recover all this data when communications were restored is unprecedented. We are extremely happy with its performance and are not aware of any other modem being able to perform to this standard”. For more information click here 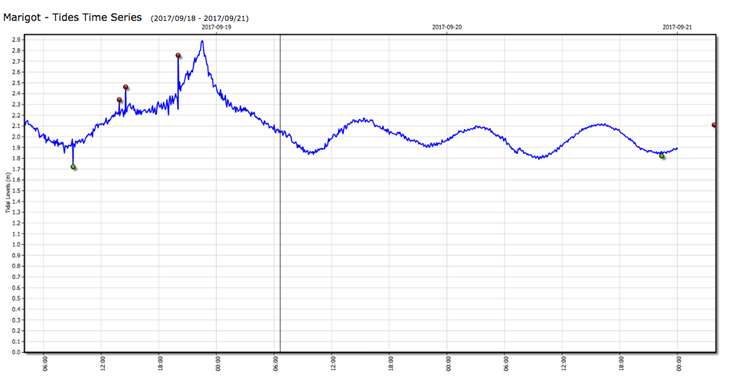